How the ear works for hearing:
The outer ear is called the pinna or auricle. This is the part of the ear that people can see.  The main job of the outer ear is to collect sounds from tiny whispers or a barking dog.
The ear has three main parts: the outer ear (including the external auditory canal), middle ear, and inner ear. 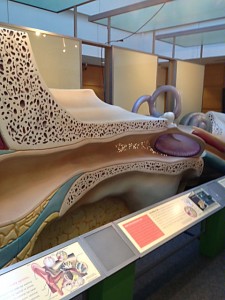 The outer ear (the part you can see) opens into the ear canal. The eardrum (tympanic membrane) separates the ear canal from the middle ear. Shown in the picture as a lavender disk.

Any source of sound sends vibrations or sound waves into the air. These funnel through the ear opening, down the external ear canal, and strike your eardrum, causing it to vibrate. 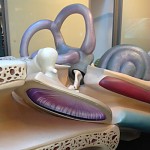 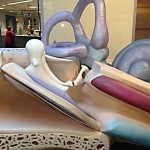 These three bones, or ossicles, are called the malleus, the incus, and the stapes (also referred to as the hammer, the anvil, and the stirrup ). 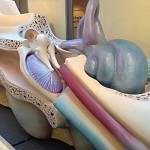 The inner ear contains the cochlea ( snail looking structure) which changes sound into neurological signals and the auditory (hearing) nerve, which takes sound to the brain.
The Process of hearing:
The vibrations are passed to the three small bones of the middle ear, which transmit them to the cochlea. The cochlea contains tubes filled with fluid. Inside one of the tubes, tiny hair cells pick up the vibrations and convert them into nerve impulses. These impulses are delivered to the brain via the hearing nerve. The brain interprets the impulses as sound (music, voice, a car horn, etc.). 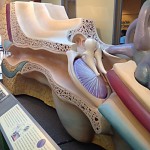 Pictures are from the Giant Ear display at the House Clinic in LA.
Click here for more info about how the ear works
eardrumHow hearing workshow the ear worksinner earmiddle eartympanic membrane
Share This
Related Posts

What are the signs and symptoms of dehydration? Dehydration can be difficult to identify in…

Why hire a private Patient Advocate?

Meaning of the letters after a Social Security or Medicare number

Ever wondered what the letter or letters after a Medicare Number mean? The Social Security…