I was helping my  84 year old Mom with her wheelchair in Nordstrom’s in Riverside.  I reached down to adjust the foot support of her wheelchair and my little finger missed the foot plate and hit the floor.  It broke the nail on my little finger.  The nail break was deep and hurt more than usual.   I asked the sales clerk for a Band-Aid,  and she did not have one, so she gave me some scotch tape to put over the broken nail.  It was still hurting, and I went and washed my hands.  We had a long drive back to Pismo Beach, and it was hurting way more than it should have been, so for the 4 hour drive I had my hand raised over my head to reduce the throbbing.  I was annoyed, thinking that this little finger nail break was causing me way more pain than it should be.  It was also very warm to the touch.  It continued to hurt all night long. 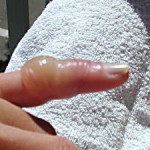 After Discharge from the ER

The next morning it was still hurting and getting warmer.  There was a little tiny pimple like spot next to where the nail was broken.  Hmm?  I thought a little fingernail infection.
I put ice packs on it as I had to drive to Carmel for  a business meeting.  Good  thing my husband was driving.   It  continued to hurt (way more than a little nail infection should hurt!)  on the 2 hour drive to Carmel.  We stopped at a local drug store along the way, and I had a conversation with the pharmacist.  There was nothing that he could suggest.  However, I put triple antibiotic ointment on it… and that did not help either.
I made it through the meeting with ice packs, as it seemed to continue to get hotter.  On the drive back to Pismo Beach,I was complaining so much that my husband wanted to take me to the local ER.  Yeah Right!  I am an nurse, and I am NOT going to the  ER for a broken nail.
I did go to the ER the next day per the recommendation of my dermatologist, when I showed them my little finger.
They lanced the little pimple spot on the side of my nail and sent me home.  My finger was still very hot.  On the way home my whole had got red and really started to hurt.  I sat on the couch with tears streaming down my face because of the pain.  I called the ER and told them what was going on…  and them said to come back ASAP. 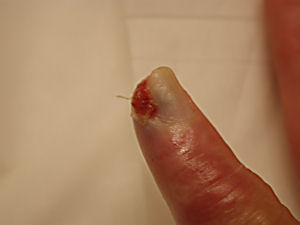 In the ER for the next several hours we watched my finger literally blister and “fry”, and it felt like it was in a deep fat fryer. 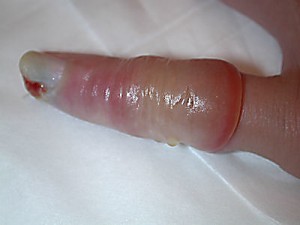 They called Rudy Buntic MD, a hand Transplant specialist in San Francisco.  He made recommendations on the antibiotic IV ” cocktail” that he felt would be helpful.   That night they wanted to admit me to the hospital, and I tried to protest, saying I work here, and I do not do “sleepovers”. RN’s make terrible patients.  However, I was so sick and in so much pain, that I was admitted.  The Pain medication made me sick and I spent the rest of the night throwing up.
Fortunately the antibiotic  IV “cocktail” stopped the progression of the bacteria and I was able to be discharged the following day with a very pregnant looking finger.
It was recommended that I contact a surgeon to debride my finger. Michael Laid MD the surgeon saw me between cases in the operating room, told me to stay NPO and he would take me to surgery as soon as he finished his last case. So off to surgery I went.
He did a great job, and fortunately was able to save my nail and the structure of my finger.  I was glad to get rid of the big blisters and weeping tissue. 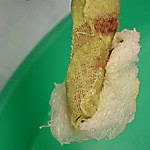 The post op course included  finger exercises to maintain the muscles and strength, as well as dressing changes and soaks to keep the new granulation tissue healthy.   No skin grafts were needed and the skin grew back through the gauze.  The healing process was slow and took several months.  Good diligent post operative word care wound care was helpful. 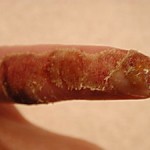 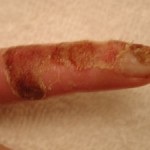 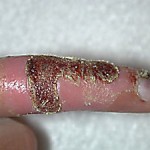 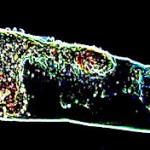 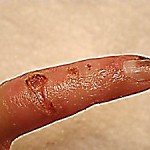 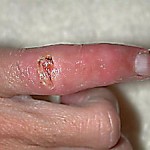 
I am grateful that my finger fully recovered, nail and everything looks normal. At the very end by the tip of the nail I have l a little neuropathy. However, I am delighted to have my finger and my hand! God is Good! My doctor Jeff Herten MD tells me I am lucky to be alive, not to mention to have my hand and my fingers! Usually they have to amputate to stop the infection.
My Patient Advocate skills and knowledge, helped my assemble a top notch team. I am VERY grateful for all their help!

LESSONS LEARNED:
Any wound  no matter how small, that hurts way more that it should should be evaluated ASAP
Flesh Eating Bacteria known as NECROTIZING FASCIITIS can be devastating as well as life threatening.
A Patient Advocate team can safe you life!

What is the Flesh Eating Bacteria?